I had a plan. After taking you on blog tours of Giethoorn, Hattem and Vries, I was really going to focus on knitting again. On yarns, UFOs and knitting projects in progress, on techniques and traditions. I had it all mapped out, at least for the coming month or so. But…

… I decided to postpone my plans for a bit. Writing about De Potterij in Zutphen last week, I thought how I’d love to show you a little more of that beautiful walled city.

So, before starting on a yarn-filled autumn, here’s one last virtual summer outing.

Just like Hattem, Zutphen is a Hanseatic city on the river IJssel. Only it is far larger, with interesting museums, impressive churches and an amazing 16th Century reading room filled with chained books. It isn’t any of those I’m focusing on today, though. It’s the walls.

A poem on one of the walls set me thinking.

It isn’t easy to translate, but here is a try.

Yes, the old walls have seen a lot. If only they could talk.

If these walls could talk, they would tell us about wealthy beer merchant Herman Sackers and his wife Fyken, who built the house in 1629, not just to live in, but also as a warehouse and an inn.

They would tell us how it was later used to store grain, converted into a bakery, became a grocery store, and still later an antiques and jewellery shop. They would also tell us that the current occupants still see grain kernels trickling down through cracks between the floor boards hundreds of years later.

Many walls in Zutphen are softened and partly hidden by greenery, often in the shape of narrow pavement gardens. 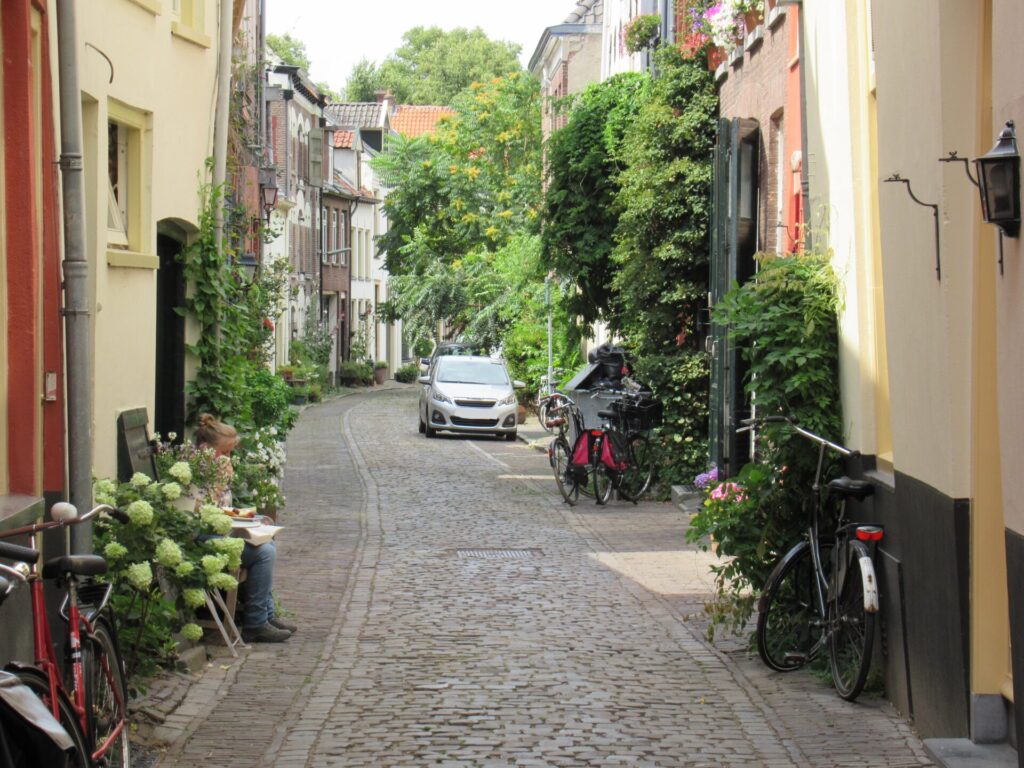 Shrubs, climbers and flowering plants planted straight into the soil, in pots… 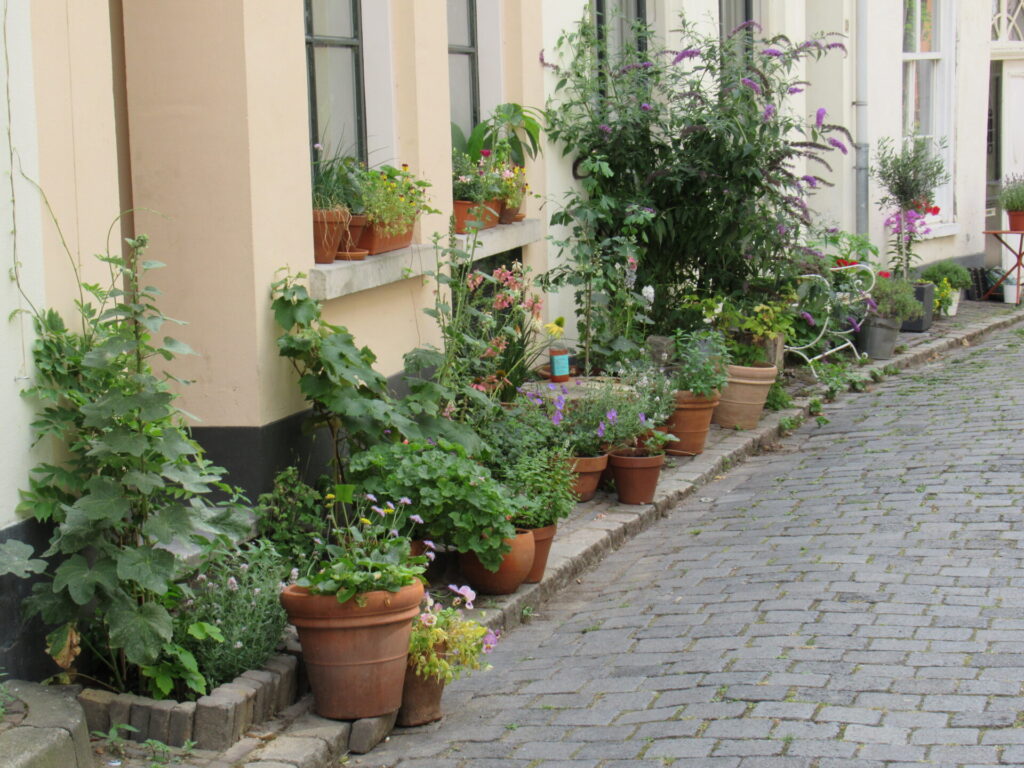 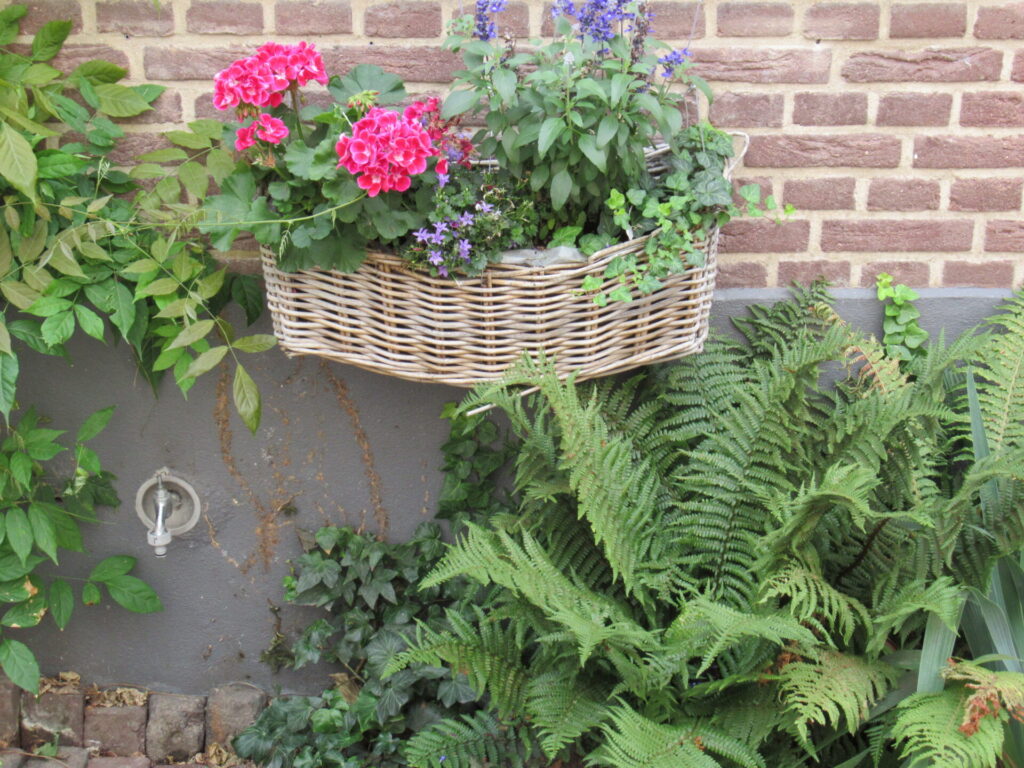 In some places the greenery is more substantial. Just outside the old walls on the south side of the inner city, there’s an orchard.

And in the orchard is one of the best places to take a break. Here teas with wise mottoes are served, and the strangest cold brew coffees, stuffed with fruit and herbs. 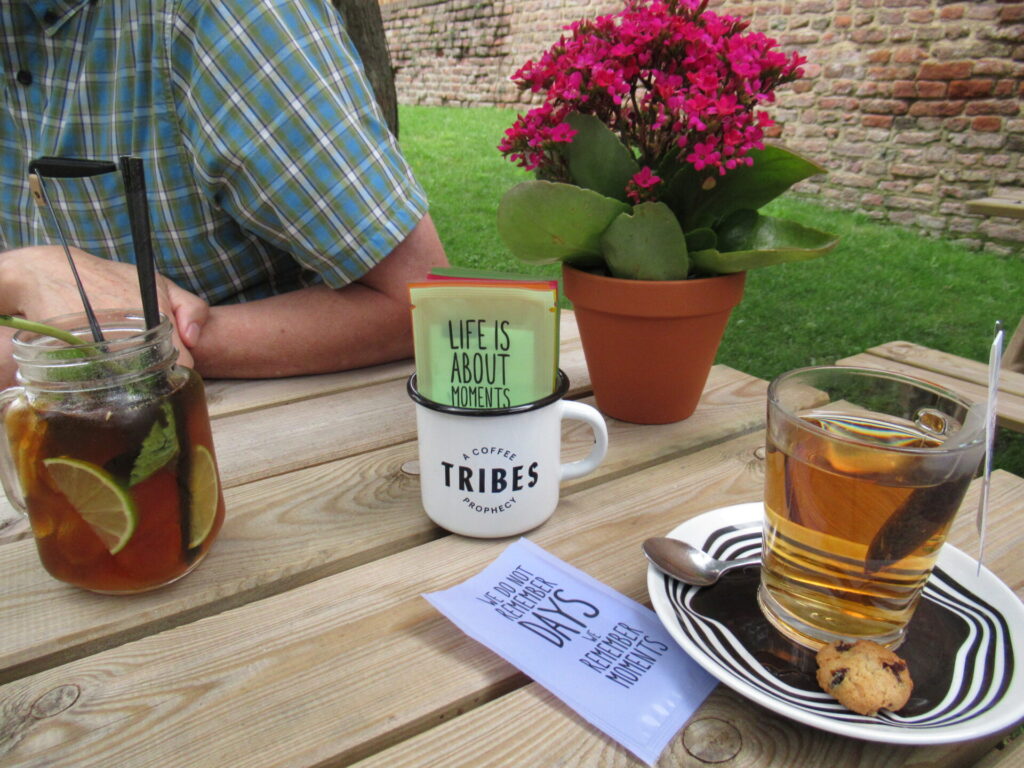 If these walls could talk, what will they say about 2020? Will it be something like, ‘That was a strange spring. Unnaturally quiet, with people staying inside their homes. But from the summer onwards everything seemed more or less back to normal.’ Or something like, ‘Yes, 2020 was a strange year compared to the years before it, but not much different from 2021’?

There was a section of the wall that whispered, ‘Knit me, knit me!’ 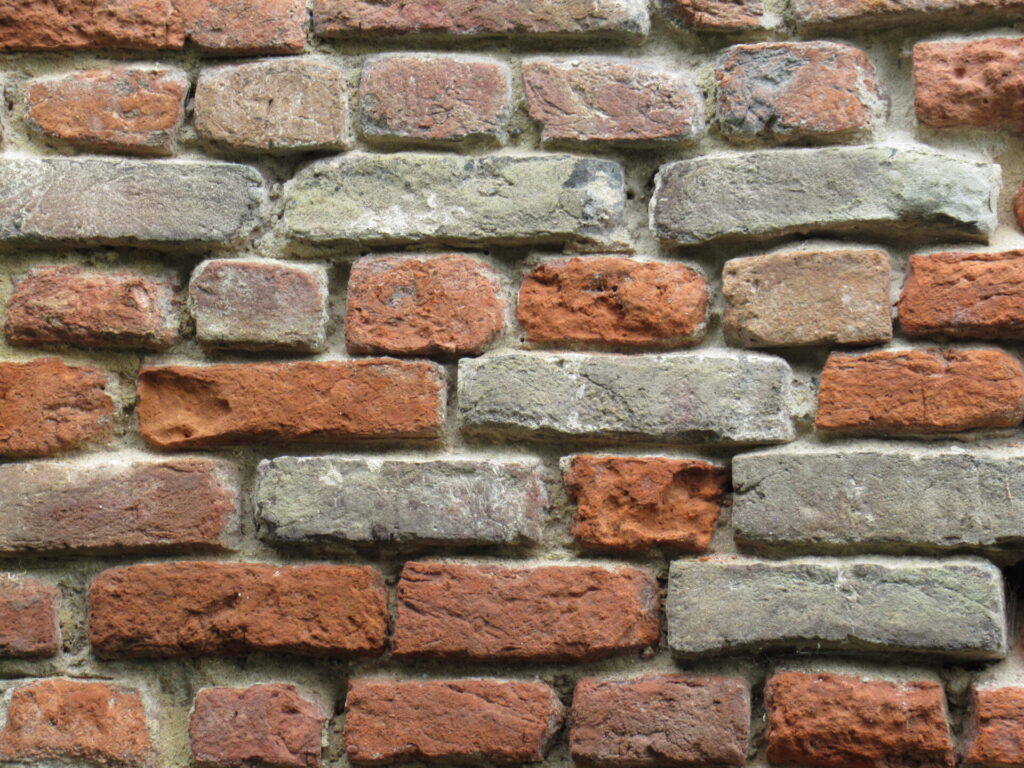 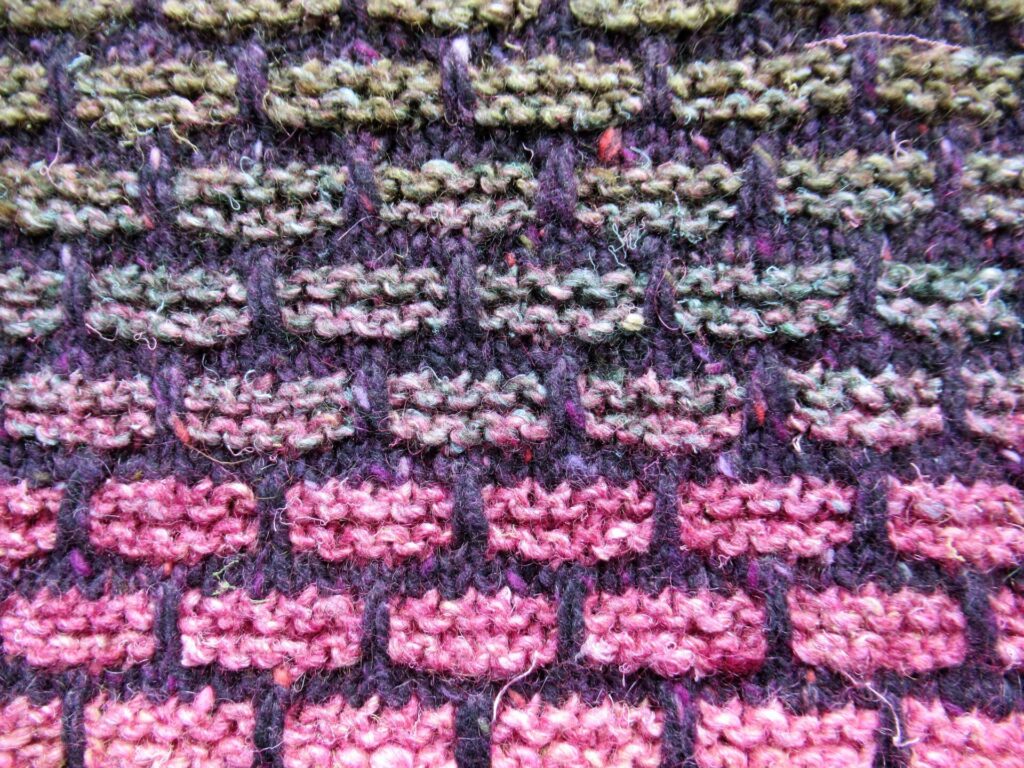 But I bet it whispers different things to different people. I imagine it whispering to others, ‘So, you love old walls, do you? Then you must go traveling. Visit Hadrian’s wall and the Great Wall of China!’

If the walls could talk, I wonder what those along this narrow alleyway would tell us.

There is a tiny little door halfway on the left at street level. What was it used for? Why would someone have lavished so much money and attention on it?

Some of Zutphen’s walls whisper, some keep their secrets, and some speak in poetry. To close off today’s post, here is another wall poem. 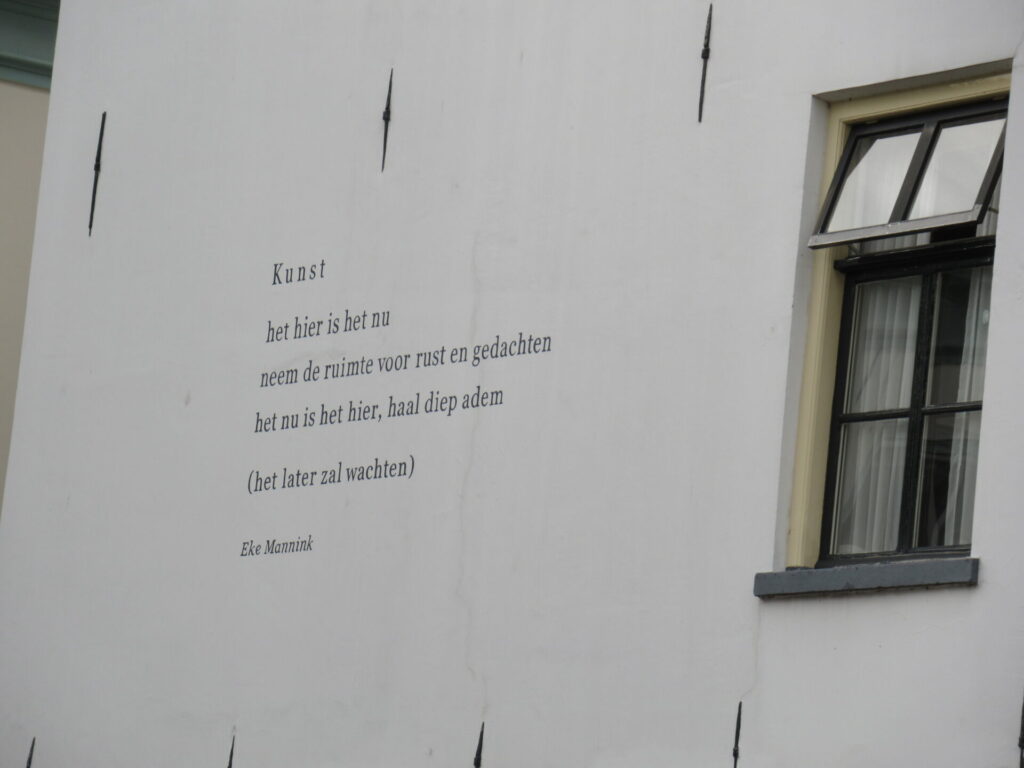 the here is the now
make room to rest and contemplate
the now is the here, breathe deep
(the later will wait)

8 thoughts on “If the Walls Could Talk”