Hello! How are you faring? We’ve had a lot of wet and windy weather here lately. The wettest February on record, our Meteorological Institute tells us. We could use some water after the past two very dry summers, but did we really need as much as this? I hope your feet, like ours, are still dry.

They also tell us that this was the second mildest winter on record, with the average temperature three degrees higher than normal. I can’t see this as anything other than a sign of rapid climate change and it worries me a lot. What can we, insignificant individuals, do?

Flowers never fail to cheer me up on dark and dismal days. I especially love roses, but roses flown in from Africa? Probably not the best idea. Tulips grown locally seem a more sustainable choice. I’m not terribly fond of tulips, but I’ll try to appreciate them more. I do love other indoor bulbs, though, like the magnificent amaryllis. 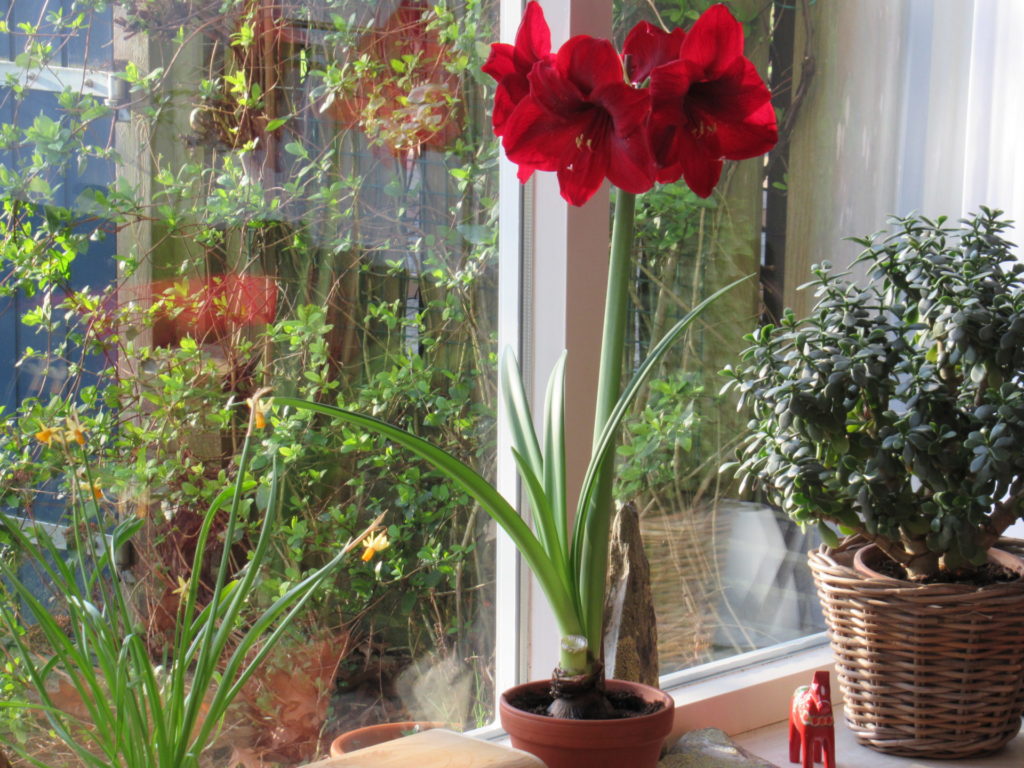 Bought from our neighbours’ boy, who sold them for a school project, I planted it in early December. It took a long time to come into flower, but when it did, wow!

Our front garden is still very bare after last year’s reconstruction, but some of the bulbs we planted are now starting to appear. Thank you, brave little dwarf iris, for your elegant flowers and beautiful colours. 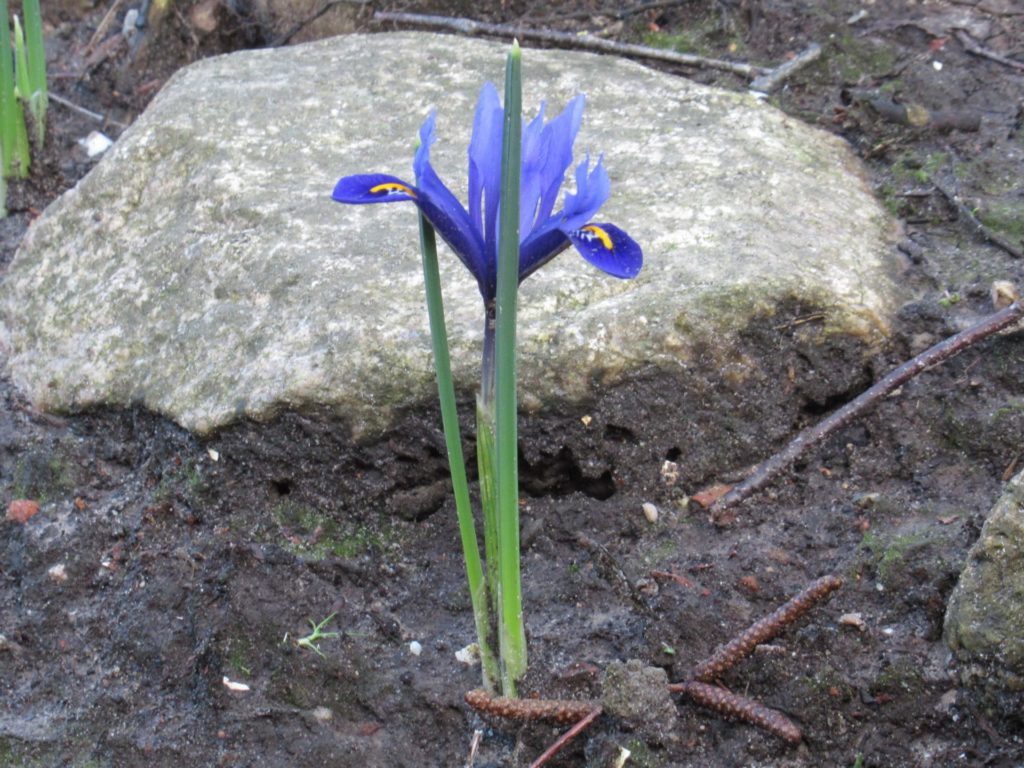 I called this blog post March Miscellany because there are all kinds of things I need to show and tell you. I hope you can spare a few minutes more.

First there is the shawl where I was dithering over whether or not to include the grey. The entire crafts group at our local library and almost everybody else I asked said: ‘Leave out the grey.’ I felt the same. The other colours were harmonious together, the grey was the odd one out. And yet, and yet…

Then I looked at the book I was reading and knew what to do. Two tiny rows of grey stitches at the colour changes, a little like the small stones in the mosaic borders along the fresco from Pompeii on the front cover. That’s what I would do. 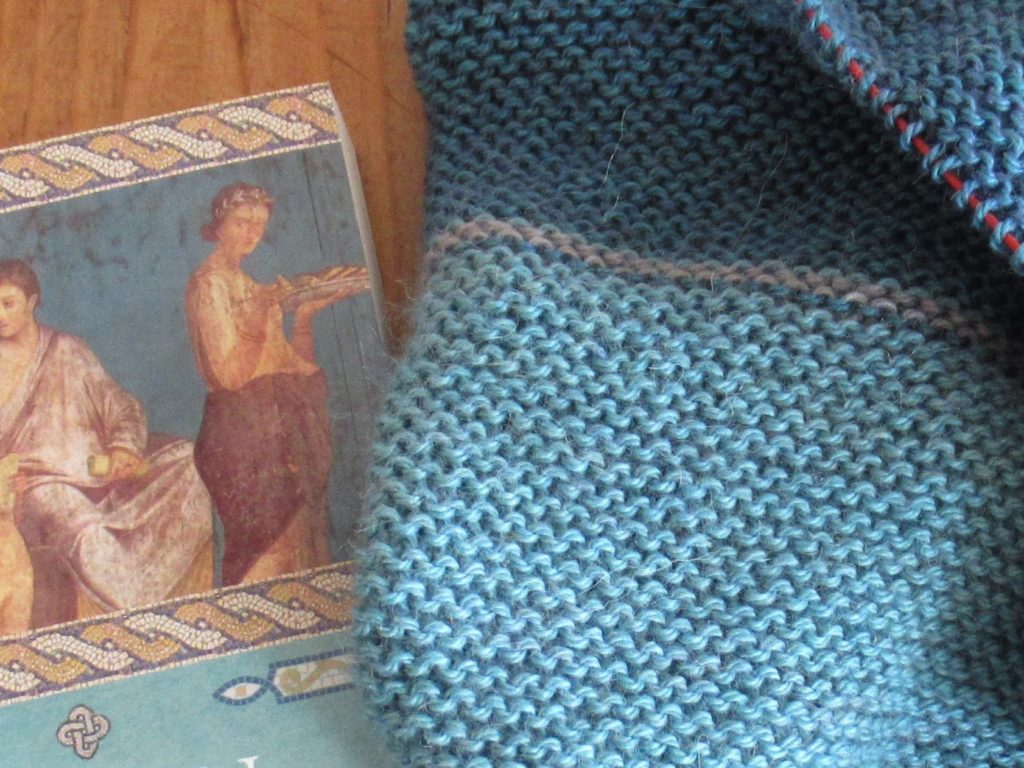 For those of you who’ve given me advice: thank you! Even though I didn’t do exactly as you said, your input really helped. It supported me in my feeling that an entire block of grey would spoil the shawl and made me look for other options.

This is what I was/am still reading: 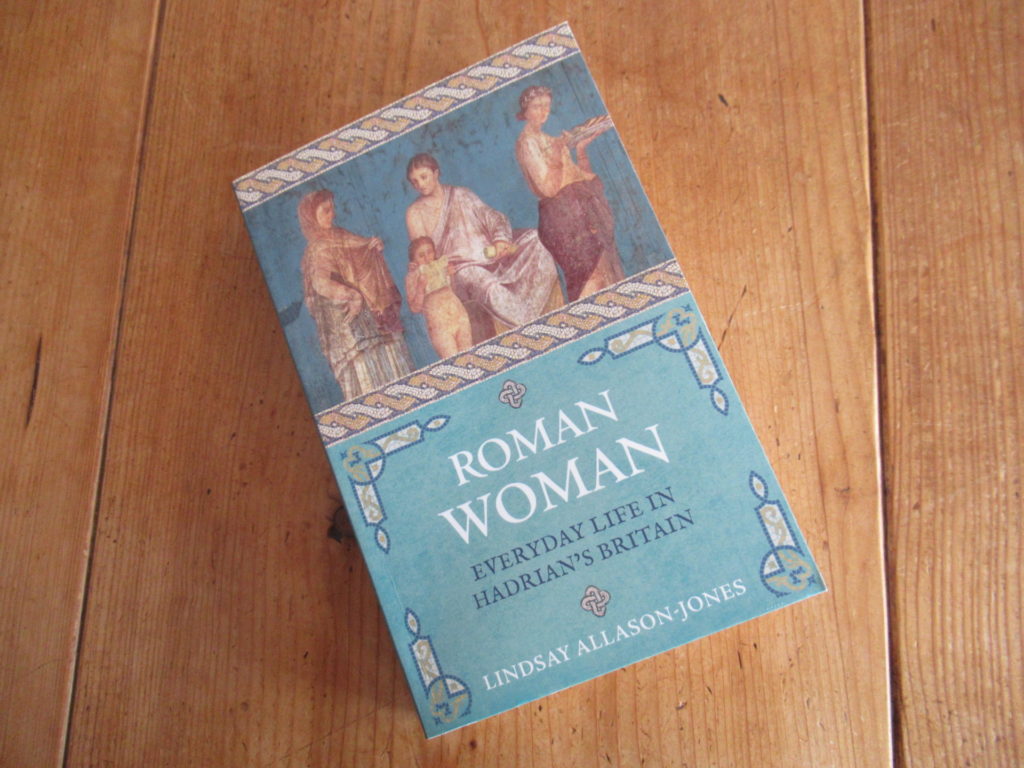 Roman Woman, written by an archaeologist, is about a year in the life of Senovara, a young woman with two children, married to a Roman veteran turned shoemaker. It is AD 133 and the family lives in York, then called Eboracum. The chapters follow the months of the year, from Ianuarius to December.

Allason-Jones has cleverly woven loads of humdrum details of everyday life in Roman Britain into an engaging story. We see Senovara caring for her family, ‘ironing’ her laundry (rubbing the creases out of her linen with a glass ball), doing her shopping, visiting with friends and going to the bathhouse. I had no idea that women at that time already plucked their eyebrows and used depilatory cream!

Senovara is from a local tribe, while her husband is a ‘Roman’ from Germania, and I think it’s particularly interesting to read how different cultures and religions coexisted and merged.

Okay, on to the next subject. THIS IS A WARNING!

In a previous post I wrote about knit blockers. You know, those handy tools like small combs that can be used for blocking knitwork instead of T-pins. Well, recently I used them to block the swatches I knit for a new design of my own, in an airy, bulky wool yarn. This is the back of one of them: 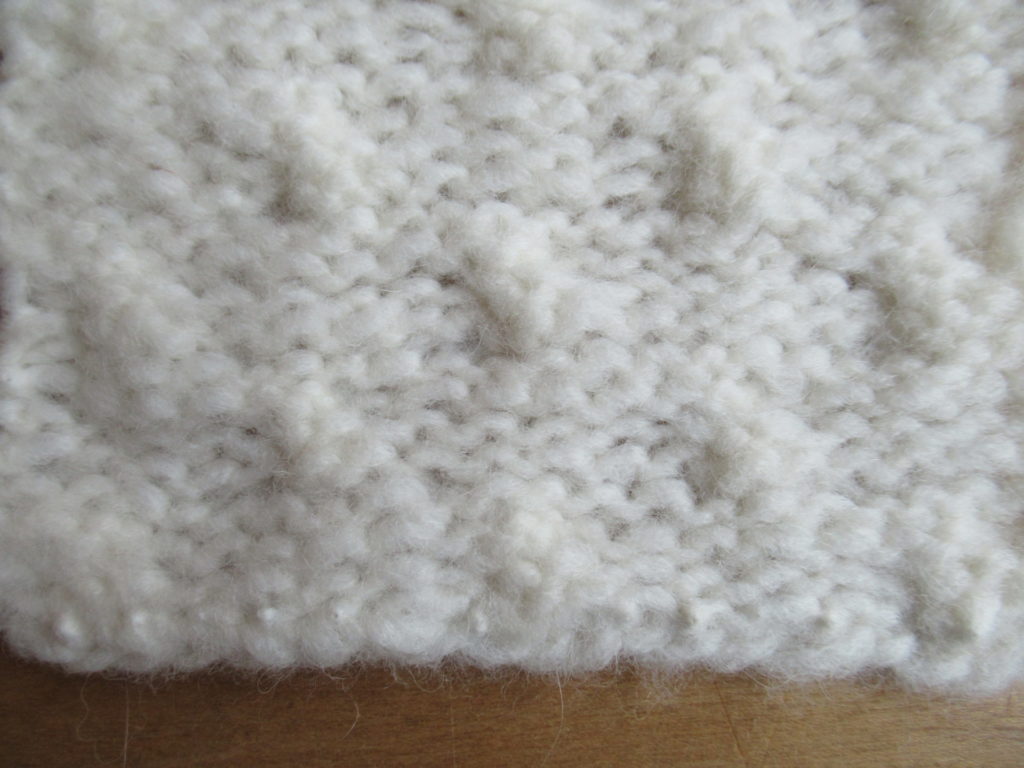 Now look at the bottom, and especially at the left-hand corner. Can you see those tiny little bumps? They are hard spikes that shouldn’t be there. Fortunately it’s just a swatch. Had it been a scarf, those bumps wouldn’t have felt nice against the skin at all. The tines of the knit blockers seem to have worked like felting needles, felting the wool in the places where they went in, and damaging the blocking mat in the process: 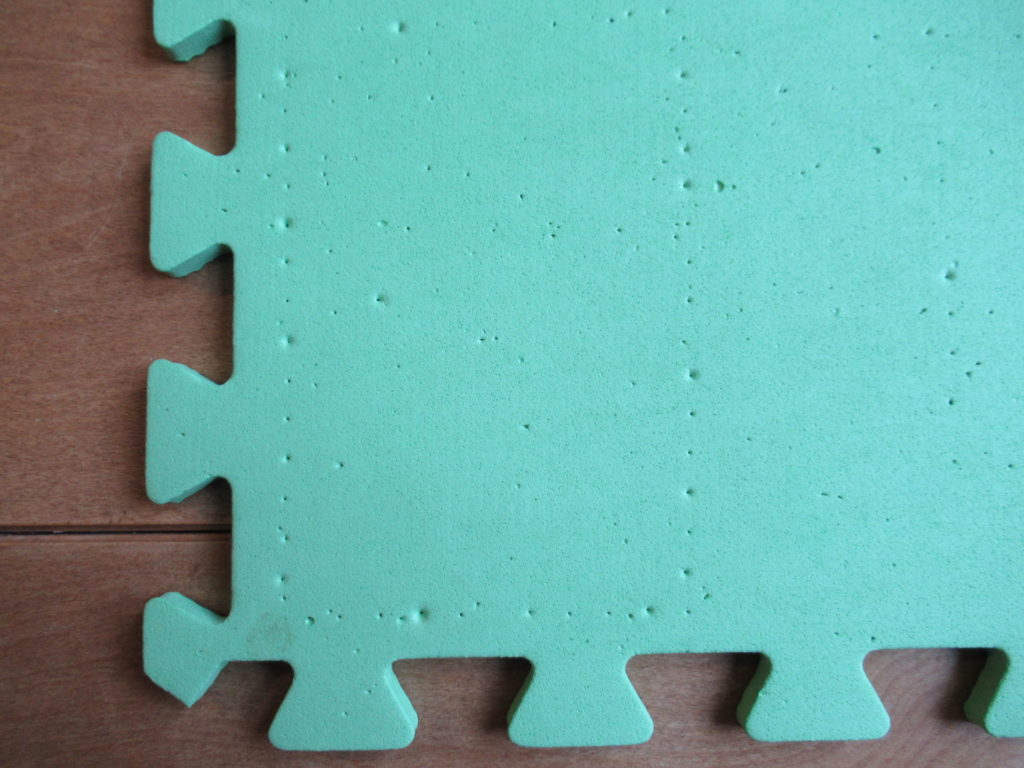 It is the first time this has happened to me. The other times I used the blockers they were fine, but I thought I’d better warn you. I’ll certainly use them again, but will be extra careful not to push through if I feel any resistance at all.

Finally, finally the yarn for our daughter’s sweater has come. It crossed the Channel several times, as it went back to sender for unknown reasons. And when it finally reached me, one of the skeins was a different dye bath. Grumble, grumble. Was this my punishment for buying yarn overseas instead of locally? 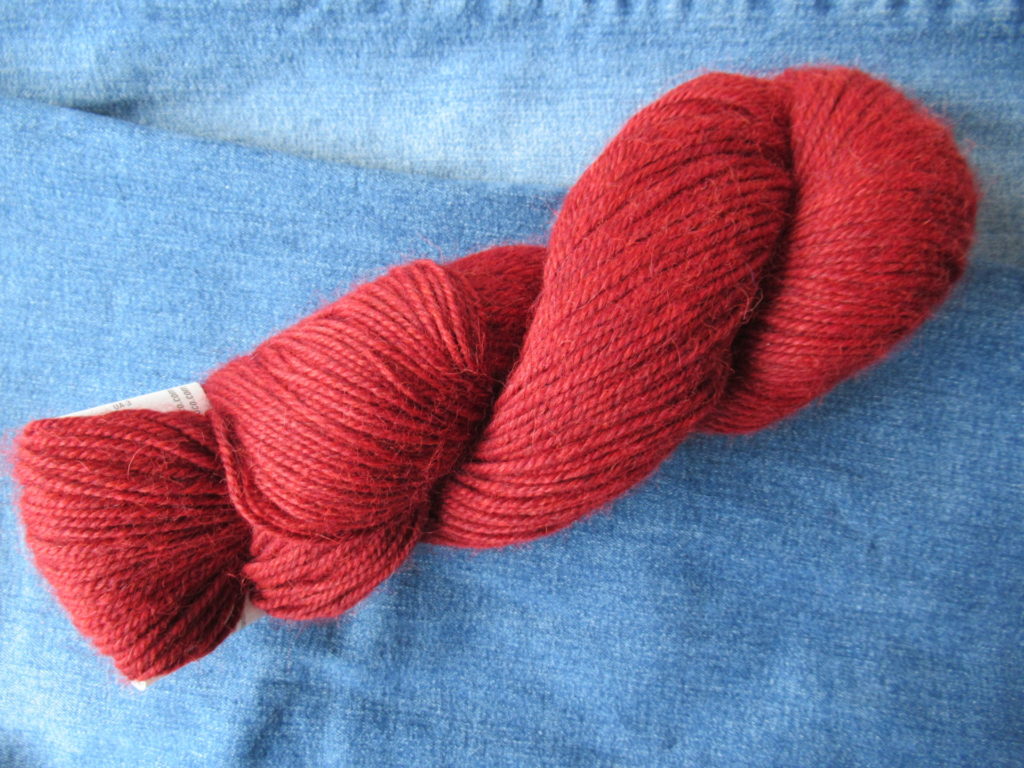 Oh, well, it won’t show if I use the ‘wrong’ skein for the ribbing. The colour our daughter has chosen is a beautiful deep brick red (darker than in the photo). I’m looking forward to starting!

I wish you a lovely weekend, with some nice knitting on your needles or a good book to read. And I hope to see you here again soon!