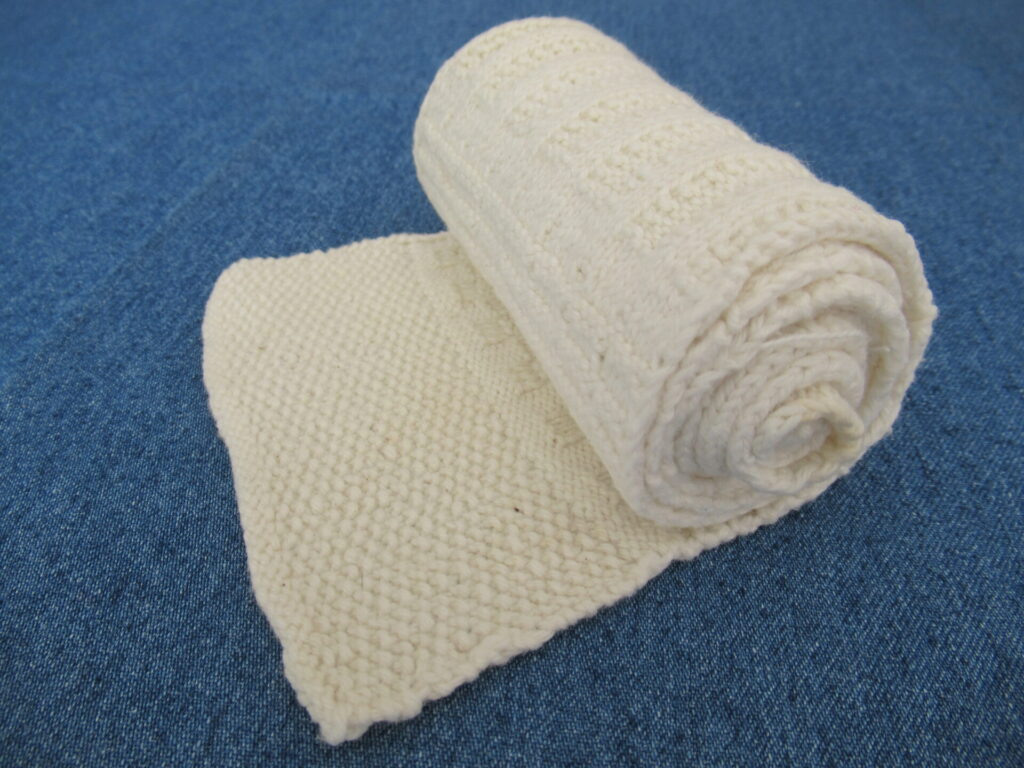 Last week, my musings about knitting traditions ended with a remark about something I found in my parents’ attic. Well, here it is – a knitting sampler. I found it in 1999, after my Mum suddenly and unexpectedly died from a brain aneurysm, aged 66.

During the decade or so before she died, my Mum worked as a housecleaner. She left other people’s houses sparkling and immaculate, but didn’t always have much time or energy left for her own home. The Christmas before she died, she told me that it bothered her that the house was so messy, and I promised to help her sort things out in the New Year. But then she died in January.

In memory of my Mum and for my Dad’s sake, I tackled the tidying after all. It was a difficult and hectic time. I was grieving over my Mum, my Dad was developing Alzheimer’s, I had a young daughter and a job. So when I found the knitting sampler, I just stored it away safely in a box in my own home and forgot about it. 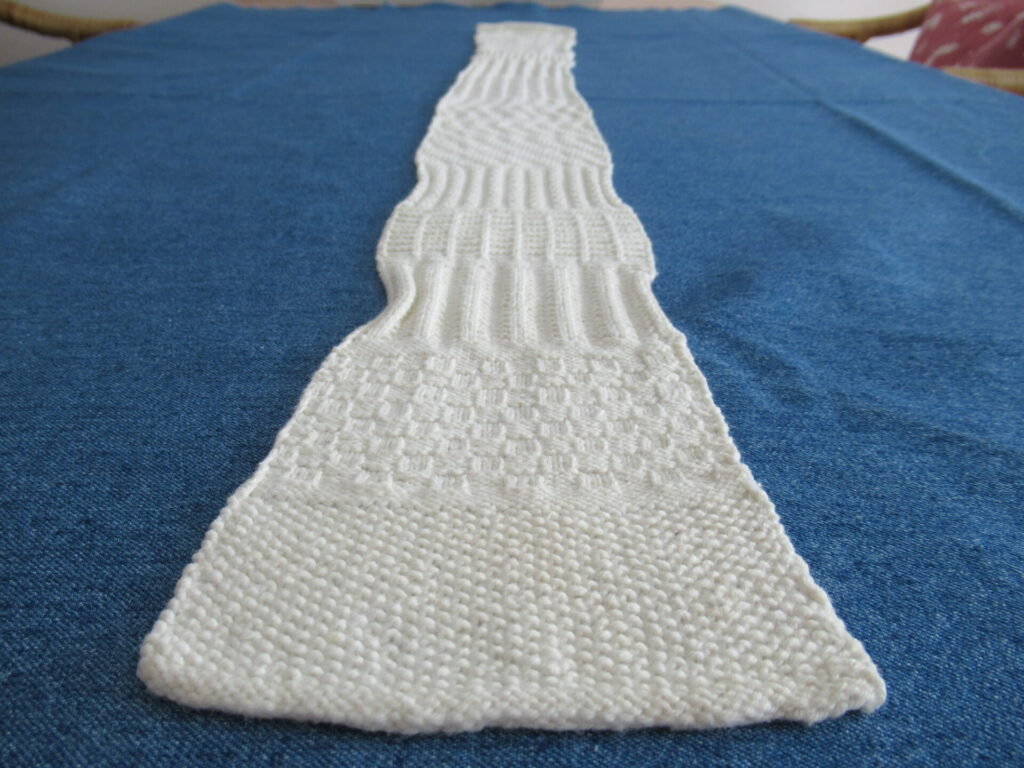 It wasn’t until earlier this year that I remembered it. Now, I’m at a stage in my life where I can give it the attention it deserves.

Who knit it? And when? I have no idea. The strange thing is that my Mum never mentioned it or showed it to me. That is strange because I did know about her embroidery sampler.

At one end, it has knitted-in initials: 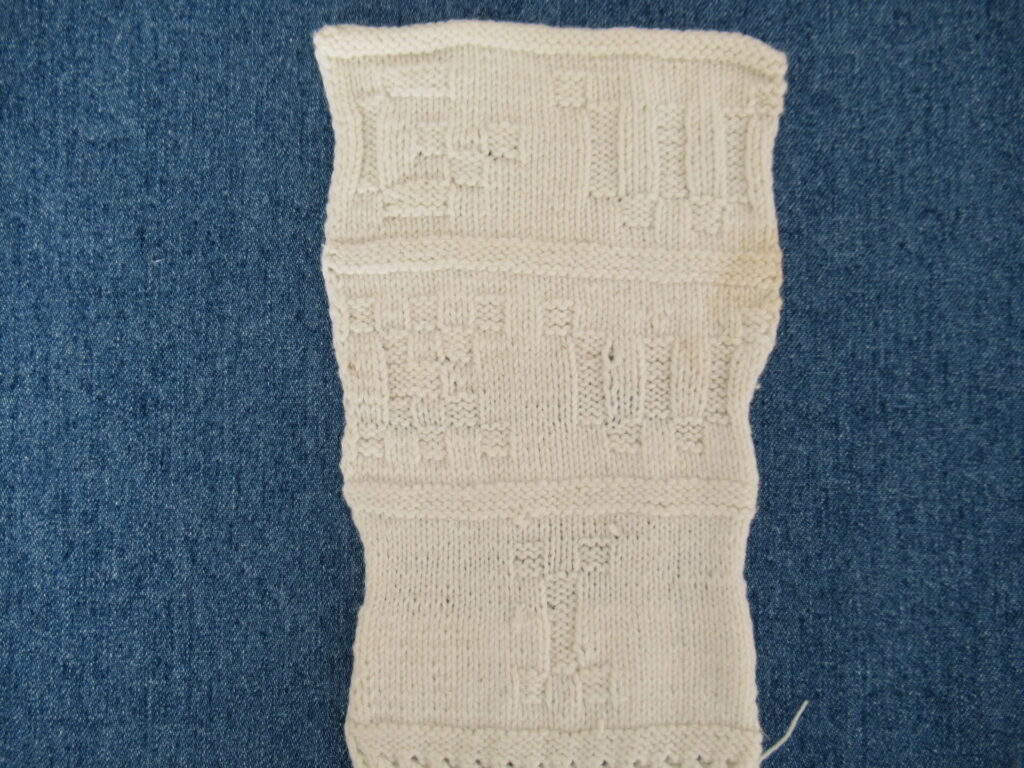 I know from embroidery samplers that girls often included their own initials as well as those of their parents. In this case, that would mean that the knitter’s name started with an I, and her parents were EW and GW.

That wasn’t my Mum. Her name started with a T. And it wasn’t my maternal or paternal grandmother either. Can it be older? I don’t know anything about my family further back than that.

Or perhaps it was knit by somebody else entirely. Perhaps it was given to her when she helped one or other of her friends clean out their parents’ homes after they died. I really have no idea and don’t know how to find out.

Well, a little more about the sampler itself. 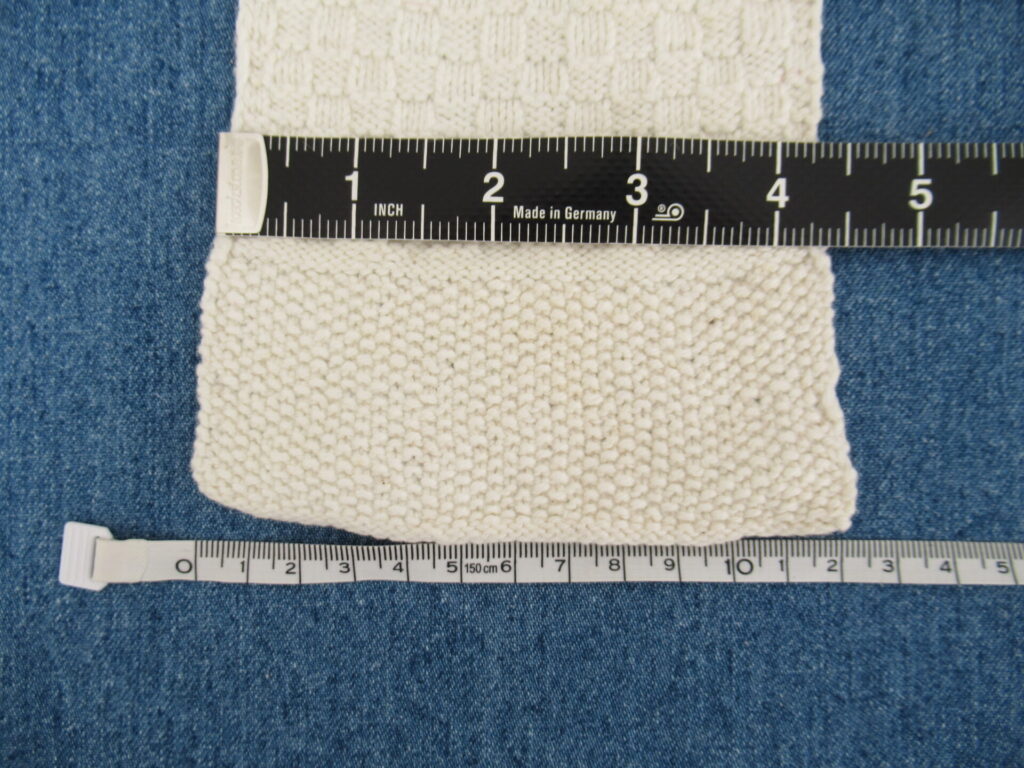 It isn’t a particularly beautiful or elaborate sampler. I’ve looked around on the internet a bit and saw some much longer ones with many more different stitch patterns, including lace.

Mine has only 10 different stitch patterns, separated by several rows of stocking stitch. And all of them are simple knit-and-purl combinations. 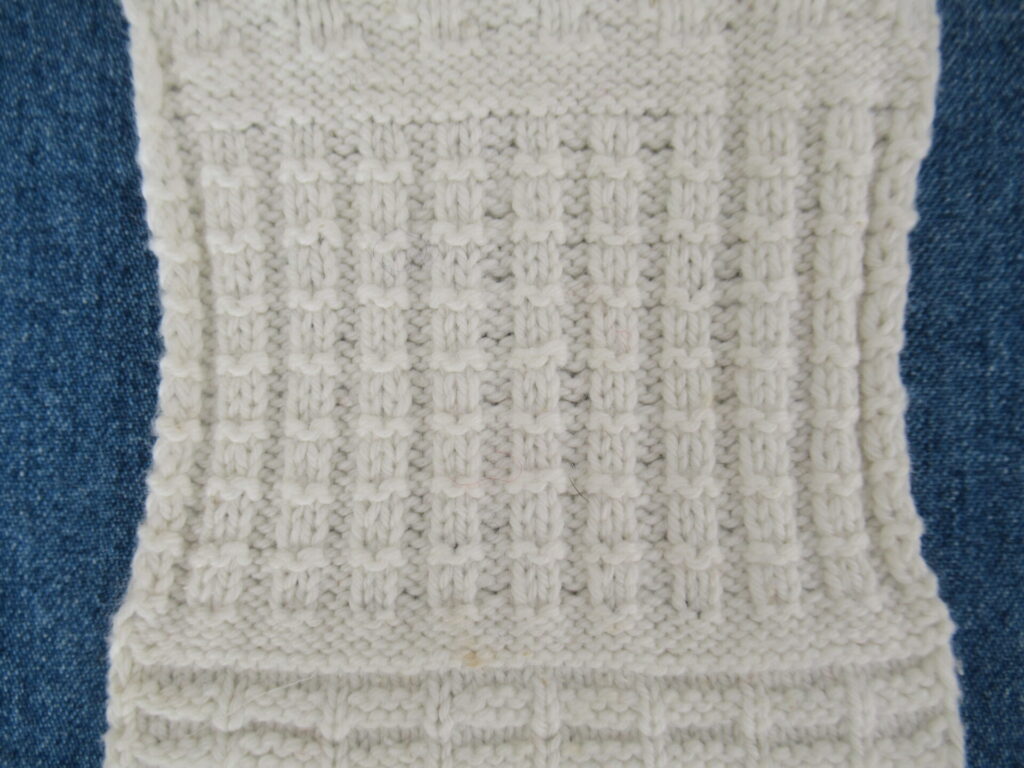 The yarn used is a whitish cotton. Was it knit in unbleached cotton and bleached afterwards? Or was it knit in white cotton that has yellowed a bit?

The knitting is rather stiff, at around 40 stitches to 10 cm/4”. Was the girl a tight knitter? Or did the knitting shrink due to washing at a high temperature?

Was it knit by a beginner? There are errors here and there, but the knitting looks quite regular. And then there are several knots in the yarn around the I. Why didn’t she choose a tidier solution? 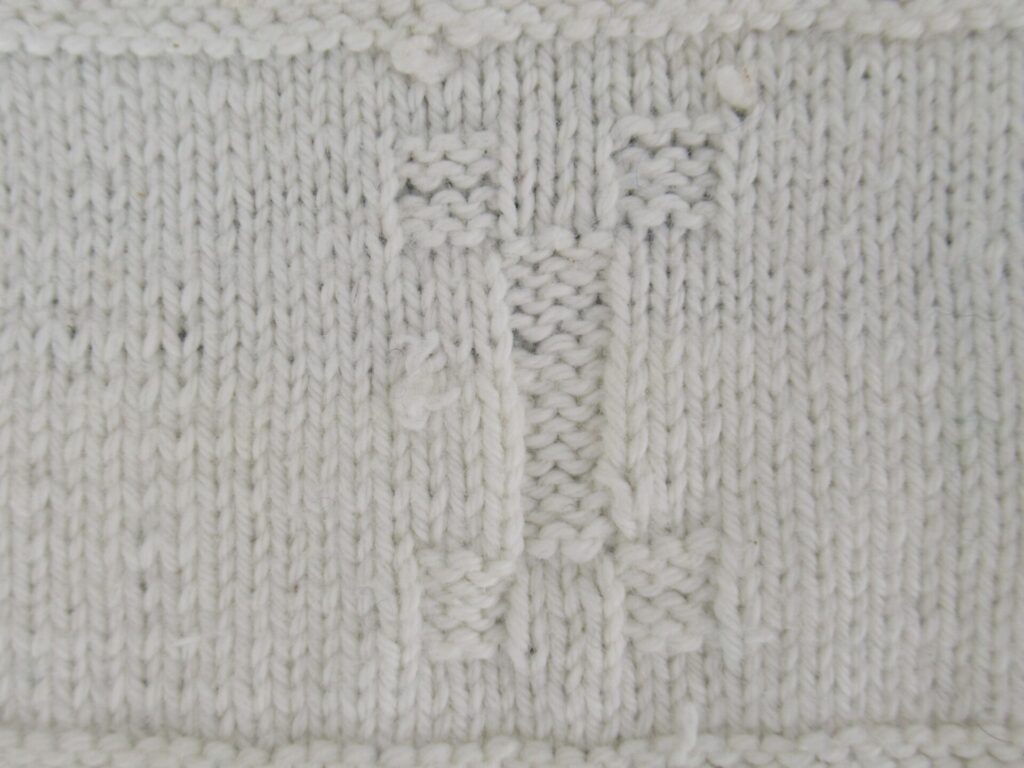 I’d love to know more about my simple sampler (and knitting samplers in general) and would be very grateful for any ideas about where to look for information. Have you inherited a knitting sampler, by any chance? Do you know who knit it or when?

I’ve been thinking about what to do with it. I suppose knitting samplers were originally not only meant to teach a girl to knit, but also to provide her with inspiration for further knitting. Useful things for her home and her family in all probability.

I like the idea of adopting ‘my’ sampler in this spirit. To use it as a starting point for some knitting projects. I’m already working on one and will show you when it’s finished.

Thank you for reading and take care!