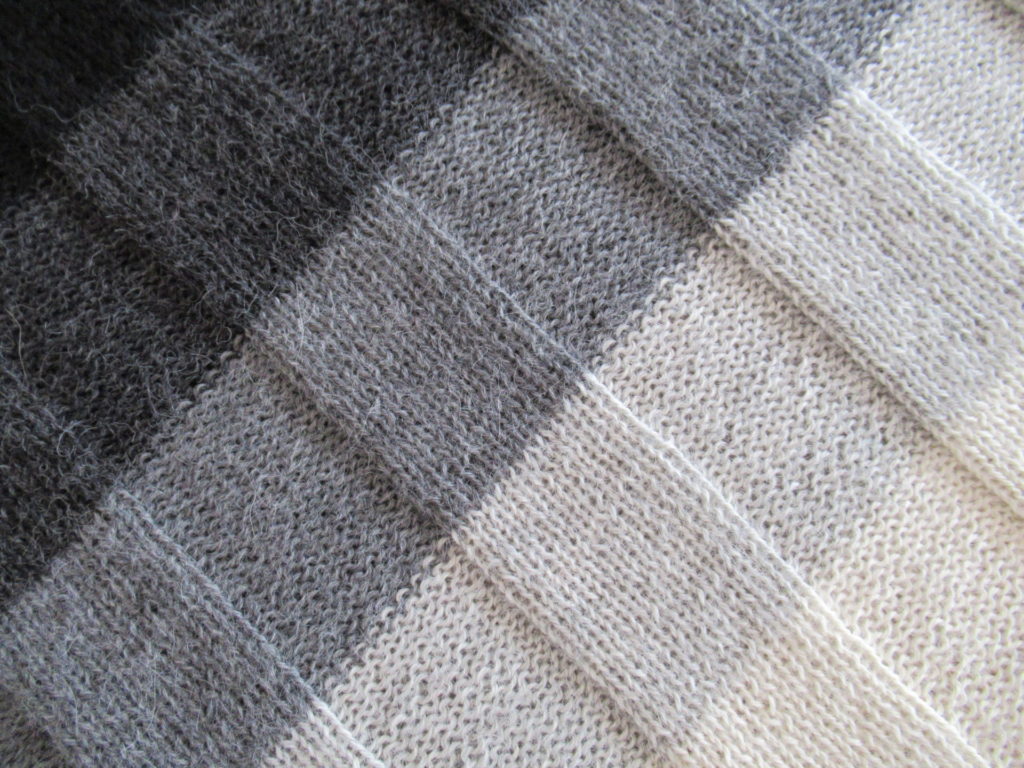 Pale, medium and dark grey, with a some clear blue thrown in now and then – that’s February skies. For people in the Southern hemisphere, like some of my relatives and friends, it’s a different story, of course. But if you’re in the North and tired of dreary days, I hope this blogpost will work as a spot of colour therapy.

A long time ago, I bought a big bag full of alpaca yarn. Single balls in many different colours and some neutrals to offset all that brightness. I was going to crochet a granny square blanket, something like this: 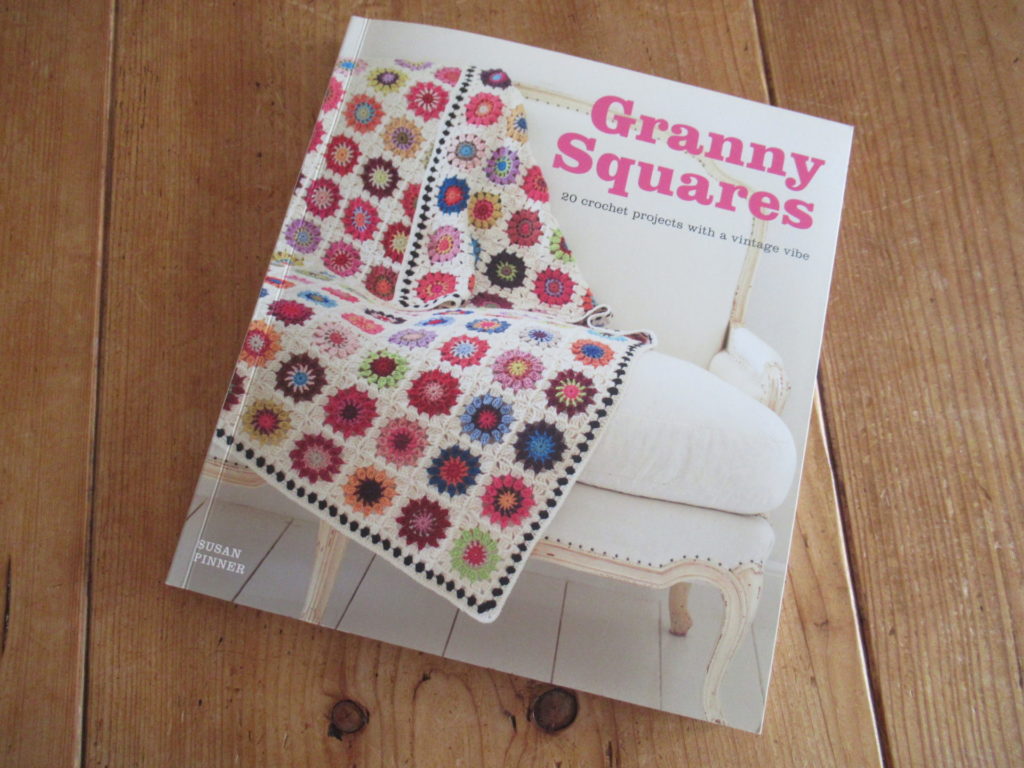 After crocheting just a few squares I realized that the yarn wasn’t suitable. At least not to my taste. It had zero elasticity, which meant that it lacked the squishiness and coziness factor that a blanket needs. It was also very smooth and slippery, and I was afraid that all those woven in ends would soon unravel.

I put the yarn away until I had a better idea for it.

Many years later, I thought of starting an ‘in-between-projects project’ – something simple to knit while I was finishing another project, to prevent that from becoming a UFO. Something that I could easily put aside when I was ready to start something new, and pick up again when that was at the finishing stage. It needed to be rather boring, or I would still be in danger of creating more UFOs.

I chose this pattern: 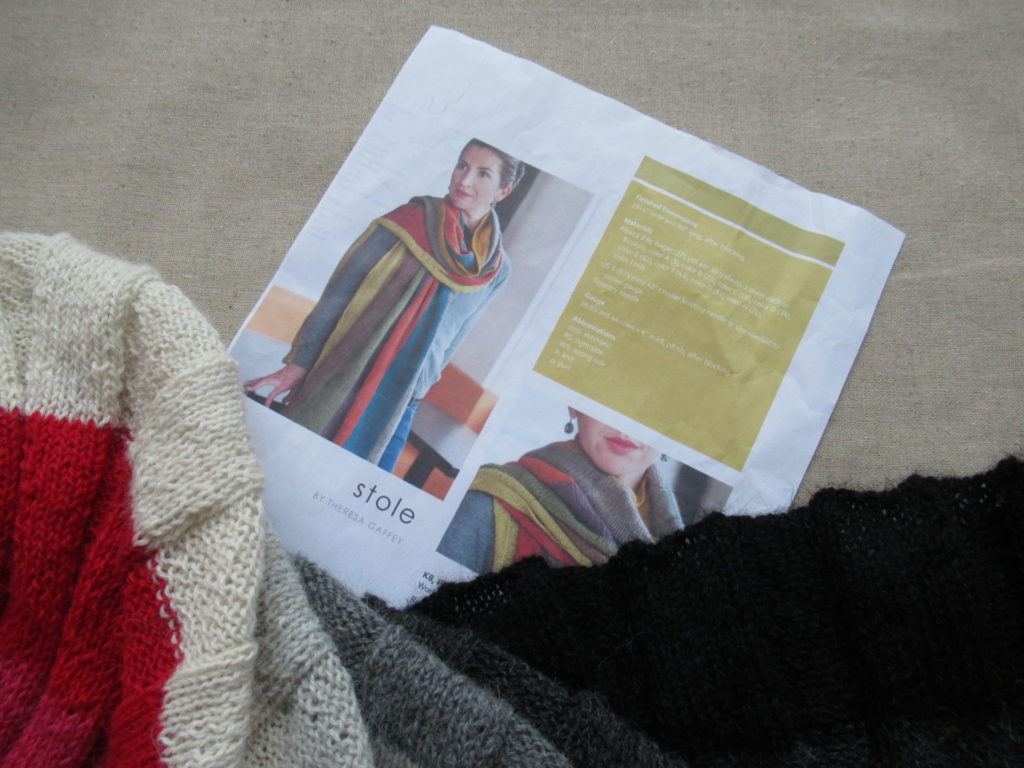 It is simply called ‘Stole’ (Ravelry link) and was designed by Theresa Gaffey. Basically it is no more than a huge expanse of ribbing. My alpaca yarn would be ideal for it – nice and drapey. There wouldn’t be too many ends to weave in that could come undone. And I had many colours to choose from.

I thought it would be nice to do one half in neutrals (black and greys) and one half in cheerful colours. This was my original colour choice: 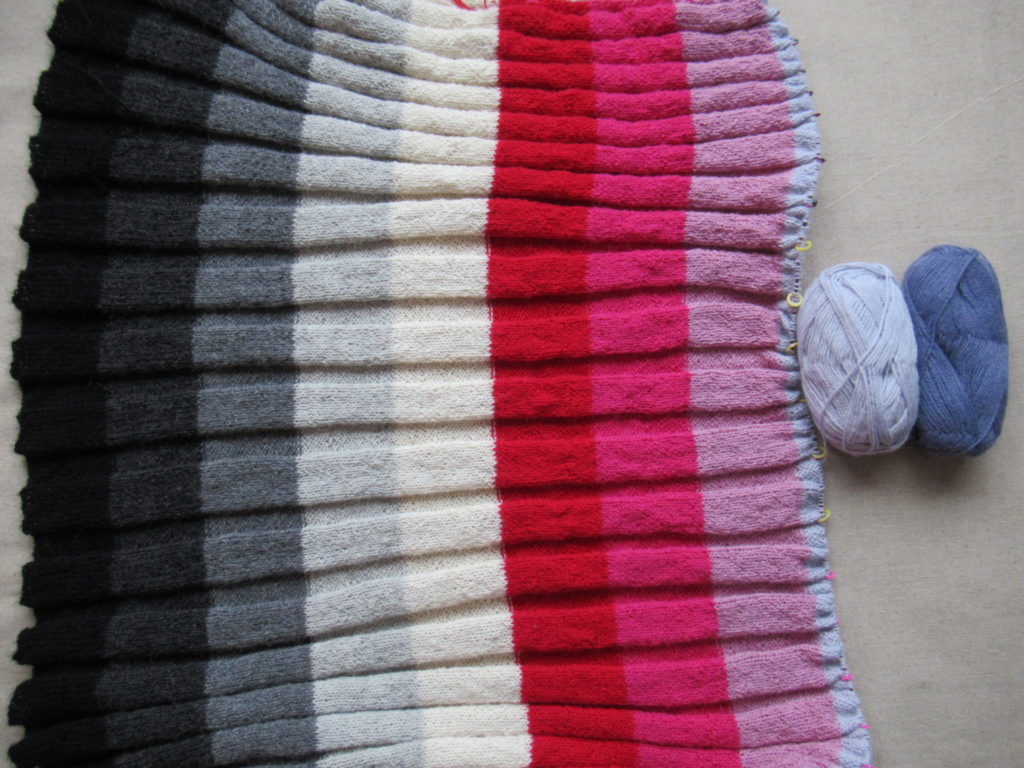 But when I was on to the last colour but one, I wasn’t happy. The medium pink looked ‘dirty’ beside the bright fuchsia, and the whole thing seemed out of balance. So I tried out all kinds of alternative colour combinations, always keeping the neutral half intact.

I tried some very bright colours next to the original red and fuchsia. Cheerful, and a lovely contrast with the neutral half… 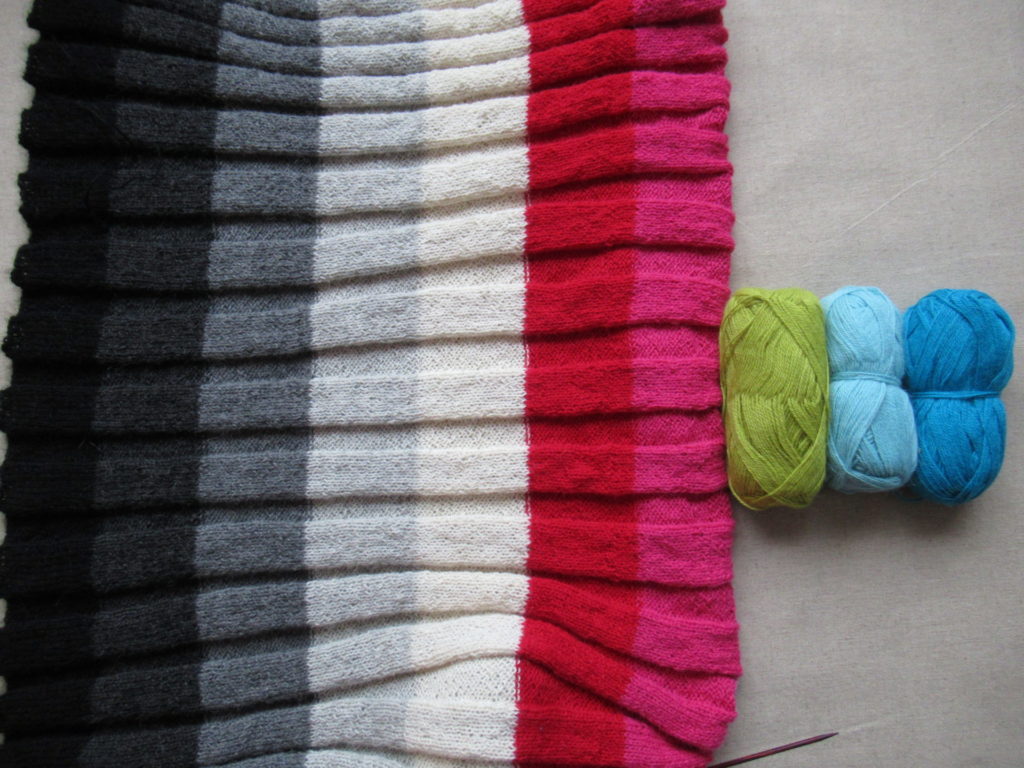 Some purples next to the red and fuchsia then? 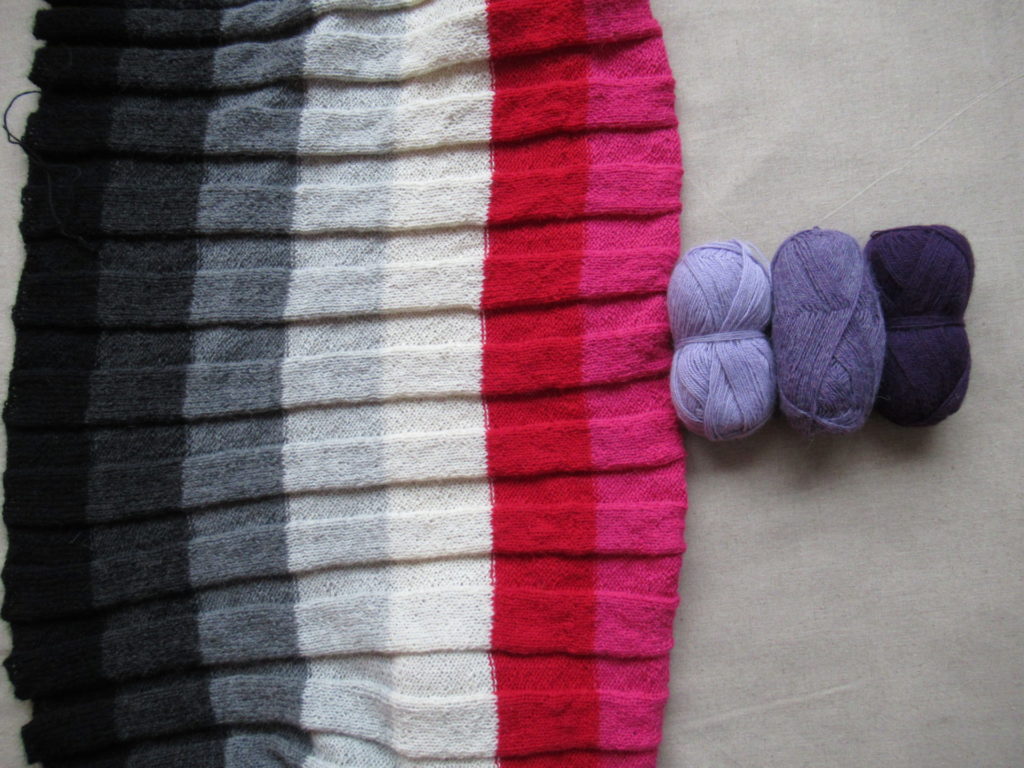 Not bad, but not great either.

Okay, what if I ripped out the red, fuchsia and pink entirely? That would mean many, many hours of knitting down the drain (there were 400+ stitches on my needles), but I didn’t mind. This wasn’t about finishing something quickly. 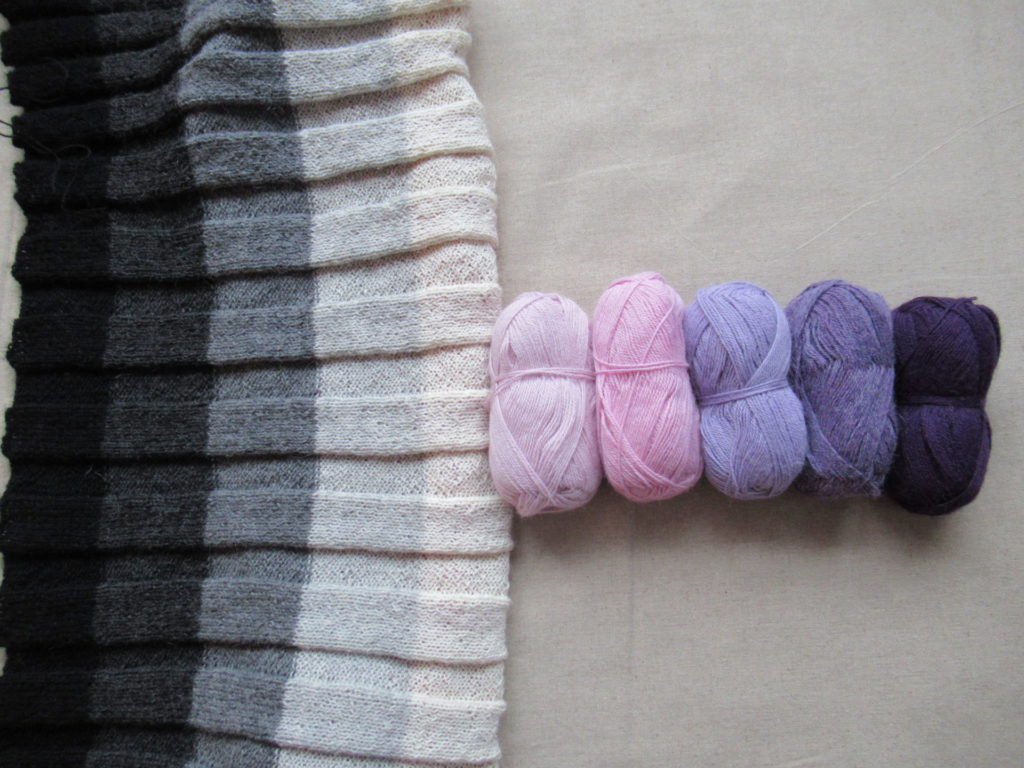 Nice. Well- balanced. But I wasn’t in love with it.

How about a gradient of blues instead? 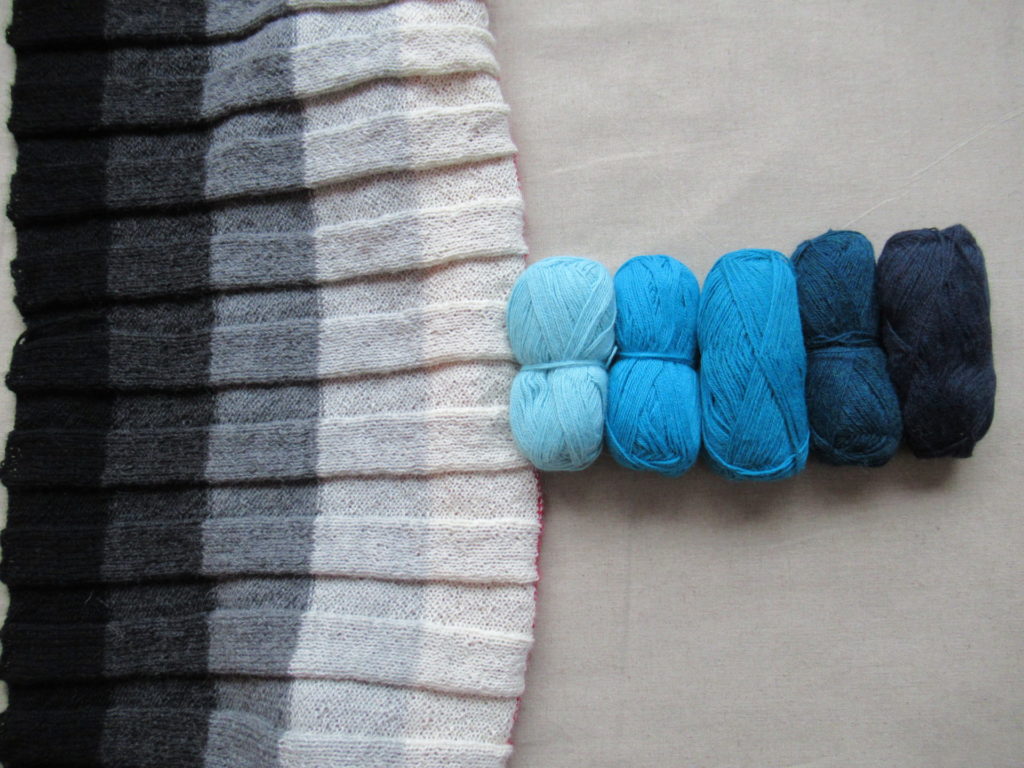 In the end I went with the blues anyway. I ripped the stole back almost entirely to the neutrals, but decided to make it a little more exciting by leaving in a very narrow band of red.

Here is Theresa Gaffey’s Stole finished:
(I wasn’t feeling very photogenic and cut my head off. Don’t worry – just in the photo.) 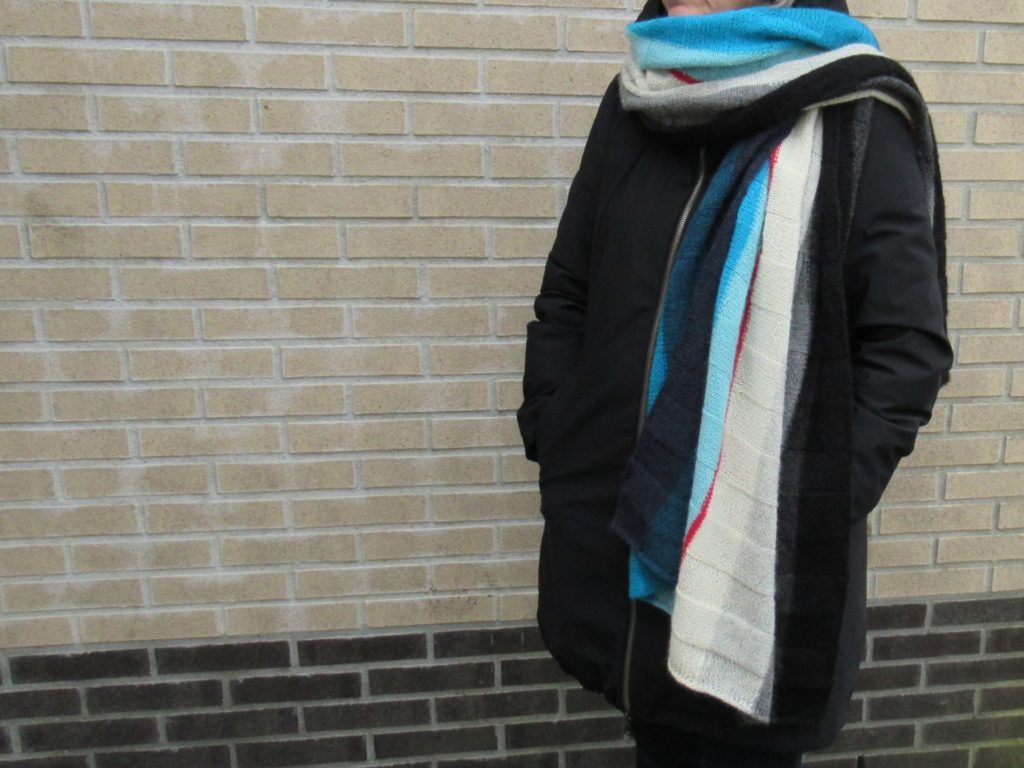 Well, it is no longer Theresa Gaffey’s stole, but very much mine. I used her pattern as a starting point, but cast on more stitches, made the ‘ribs’ several stitches wider, added I-cord edges, chose a very different colour combination, and used 11 colours instead of her 9.

That’s one of the nice things about knitting. You don’t need to be hugely creative to make a project your own. Just choose different colours, tweak a few details if you like, and you end up with something unique. 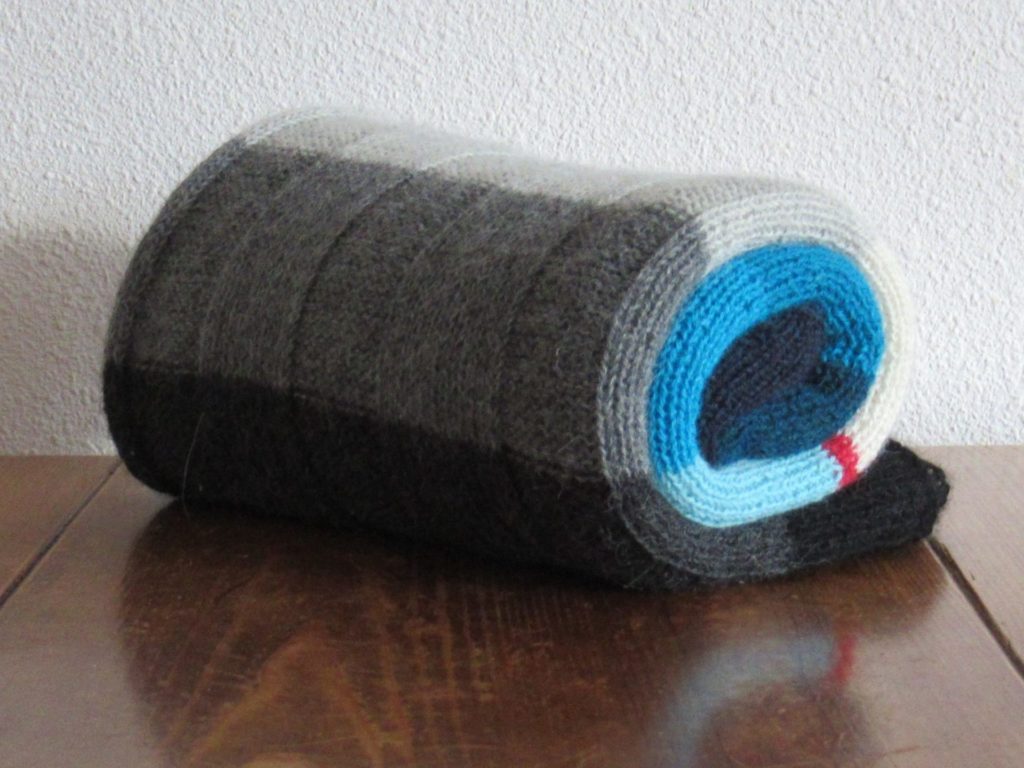 I didn’t use blocking wires to stretch the knitting out. I just soaked the stole in a no-rinse detergent for 30 minutes and put it in the spin-dryer. Then I stretched it out on the floor, using my hands to smooth and stretch the knitting as much as possible. As an alternative it could be stretched out on a bed, or perhaps even folded double and stretched out over a drying rack. Warning: Some colours may bleed!

Now I still have more of the alpaca left. 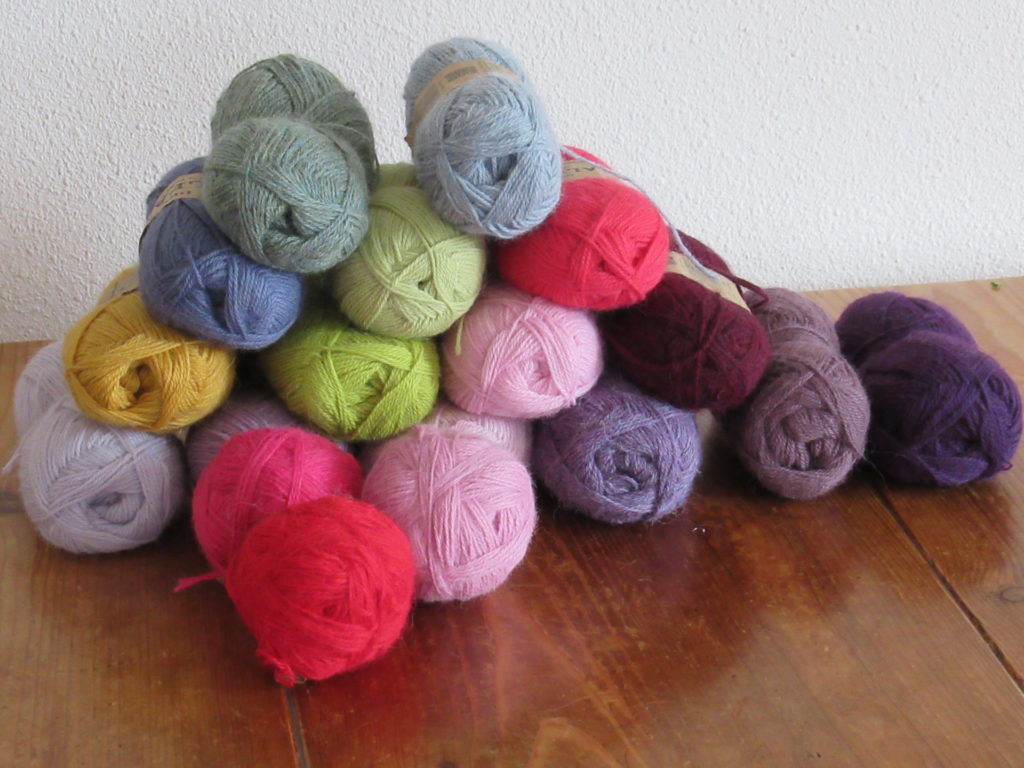 Would I like to make another stole like this? Hmmm, maybe later. I loved the meditative nature of this project. And my idea behind it seemed to work – I haven’t created any new UFOs for quite a while. (I haven’t finished any old ones either, but I’m working on that.) But I think I’ll first choose something else as my next in-between-projects project.